Cookies help us deliver our services. By using our services, you agree to our use of cookies.

From KnightFight Wiki
Jump to navigationJump to search
This page is a translated version of the page Gildenkrieg and the translation is 100% complete.
Other languages:
Deutsch • ‎English

Via the menu item "Declaration of war" you can declare war on other guilds as an admin of a guild. Every war starts after a 24-hour waiting period and then always runs for 7 days. All battles that take place between guild members during this time are logged. For each battle, victories, distributed hit points and captured gold are recorded. The guild that has achieved more in 2 of these 3 categories after 7 days has won the war.

Each guild can fight a maximum of 5 wars at a time. 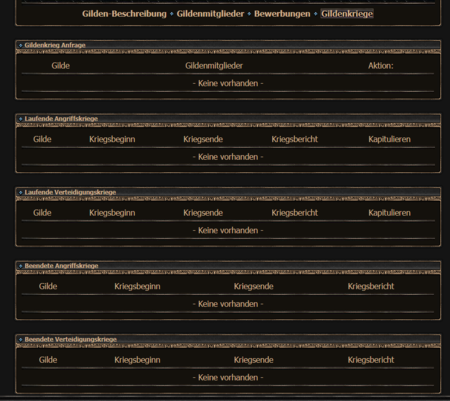 Overview of the Guild Wars

Attacks on enemies of war

During a guild war the 12 hour protection remains in place, nothing changes compared to normal fights, except the settlement after the fight.

leaving during a war

If a guild falls below this limit (5 members), all ongoing wars are stopped and counted as a defeat for the guild; the same applies if more than 20% of the members of any of the participating guilds resign or are removed from the guild during an ongoing war. If a guild member resigns during a war, he or she will not be able to rejoin the same guild for a week!

A war can be ended at any time by surrendering; on surrender, the war is calculated as defeat for the surrendering guild!

When is the 24 deadline over?

When the time of the 24 h waiting period has expired, you can check as follows 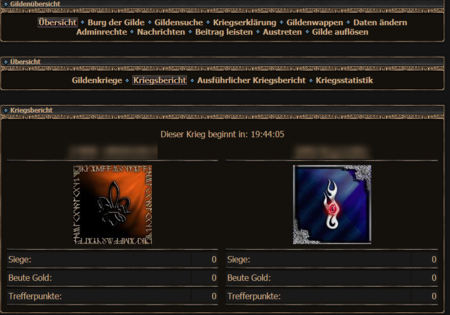 How many times can war be declared on the same guild?

After the end of the war there is a 7-day ban. There are two possibilities:

Information of the guild members

As soon as the guild war has been declared to you, all members will receive a message:

and here is the message as it is structured: